From stagecoach to motorcoach, a history of RVs in the

Duck into the Old West Museum in Cheyenne, Wyoming and you’ll see so many chuck wagons, sleek phaetons, and sturdy stagecoaches you’ll think you stumbled onto a Clint Eastwood film set. The museum, part of the broader Frontier Days rodeo complex, is home to the largest collection of of pre-automobile vehicles West of the Mississippi. It’s also, somewhat unintentionally, a prologue to the sprawling RV/MH Hall of Fame in Ekhart, Indiana – the midwest manufacturing town that’s turned out most of the motorhomes, travel trailers, toy haulers, and recreational vehicles you’ll see on highways not only in the US, but around the world.

That’s because long before Winnebago was a household name, and even before companies like Ford made the automobile king of the road, the buggies, coaches, and wagons you’ll see on exhibit in Cheyenne or the Plains Museum in Laramie were the original RVs that helped Americans get outside not for work, but for the sheer fun of it.

Now a century later, RVs are having something of a renaissance. Not only have sales gone up in recent years, RV users are increasingly diverse. And many in the industry are predicting that the COVID-19 pandemic is about to create a major boom for motorhomes as many adopt RVing as a way to travel while practicing social distancing. But how did these rolling homes on wheels get their start? To answer that, you’ll have to travel back to the wild west, and the rugged landscape of Wyoming. 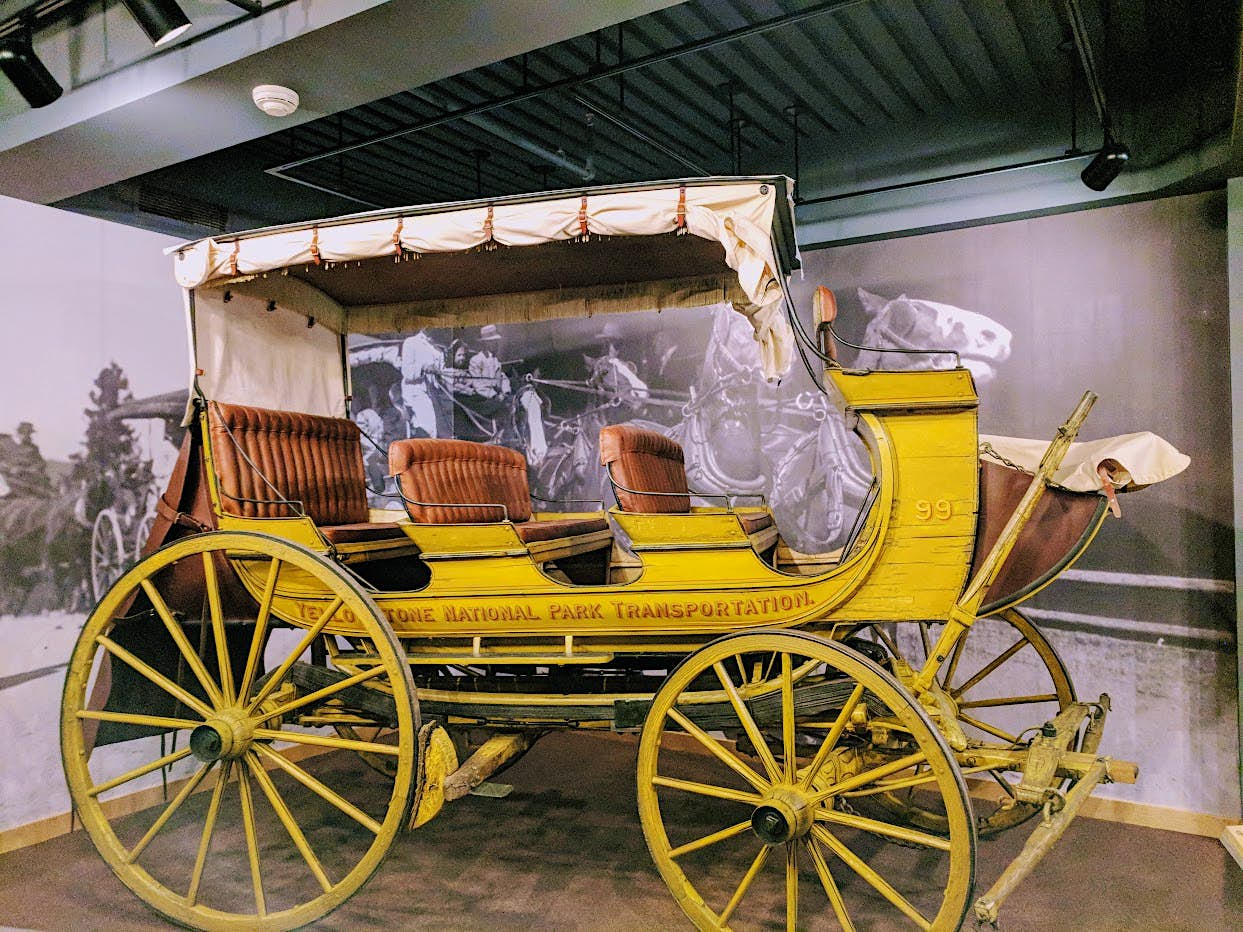 The history of the first RVs

One of the jewels of the Old West Museum is an original Yellowstone stagecoach in the signature bright yellow hue that’s still standard for the park’s current fleet of buses and snow coaches. The Tally-Ho Touring Coaches, as they were known, were manufactured by Abbot-Downing Company of Concord, New Hampshire especially for the Yellowstone Park Transportation Company. The century-old paint job is flaking off the museum’s example, but it’s still easy to get a sense of what it would be like to tour the United States’ original national park behind a team of horses after making the long journey from cities back east via the Northern Pacific Railroad.

Long before major thoroughfares like the Lincoln Highway or Route 66 linked states from coast to coast and made road trips to national parks possible, visitors arrived in train cars and stayed in grand hotels built by the railroad companies themselves, often with an architectural style that blended western rustic with Old World alpine motifs – a genre that came to be known as “parksitecture.” Back then, a multi-day tour through the park cost about $50 a passenger (over a $1,000 today if you account for inflation), and took you from the North Pacific Railroad’s station in Cinnabar, Montana, to the hotel at Mammoth Hot Springs, which you can still visit today. 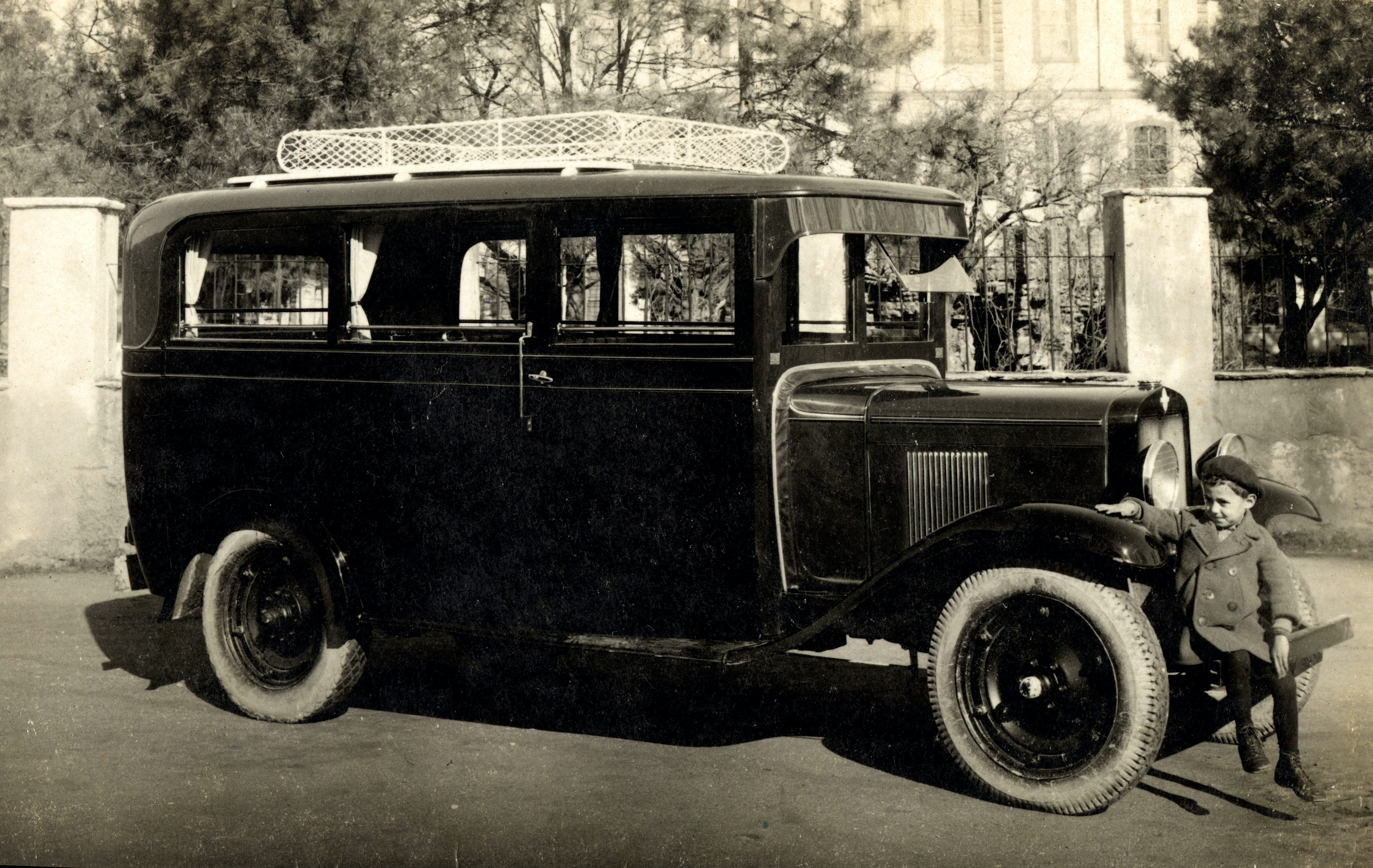 Soon the well-to-do tourists who went to the trouble and expense of trips out west wanted their own recreational vehicles in which to tour national parks, or the countryside closer to their homes and summer retreats. Carriage companies began to add extra features like fold-out beds, sinks and “potted toilets” to the landaus they were already manufacturing – landaus being a kind of precursor to the modern convertible, with a broad passenger seat and a fold-down top.

In 1910, Pierce-Arrow debuted its new Touring Landau at the Madison Square Garden auto show. It was a swift, sporty carriage equipped with many of the comforts of home, perfect for the leisure class’s recent yen for escaping the polluted, crowded city in favor of outdoor adventures. The Pierce-Arrow was not only the first RV as we know them today, it was also the ancestor of today’s Type B motorhomes – part car or truck, part home on wheels. 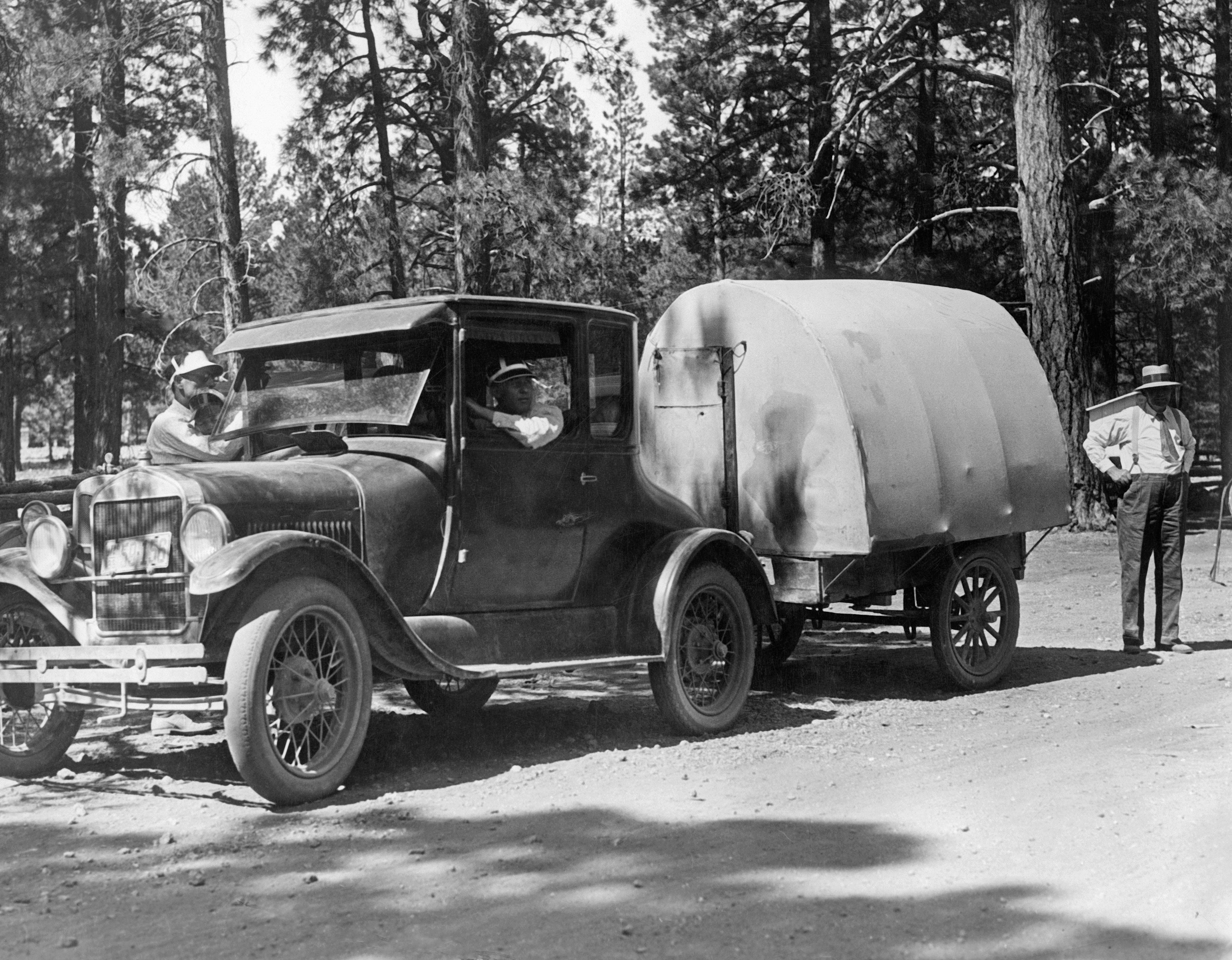 RVs in the age of the automobile

It didn’t take long for other carriage makers to roll out their own versions of the Pierce-Arrow – or for the burgeoning auto industry to get in on the small but exciting RV trend. Some of the innovative wealthy converted Packard trucks into the first ever Class C motorhomes (the mid-size RV models built on truck chassis, often with a bed in a pop-out over the cab) and in 1910, a Michigan company called Auto Kamp started rolling out the first pop-up campers much like the ones you know today, with space for sleeping, cooking, and dining.

What set the Auto Kamp apart was that it was designed not to be pulled by horses like the Touring Landau, but by the brand new Model T’s that rolled off Ford’s Detroit factory lines just two years before. The age of the automobile had arrived, giving a broader swath of Americans access not only to Yellowstone, but the six other national parks that had been established in the decades following the United States’ first national park, including Sequoia, Yosemite, Mt. Rainier, Crater Lake, Wind Cave, and Mesa Verde. 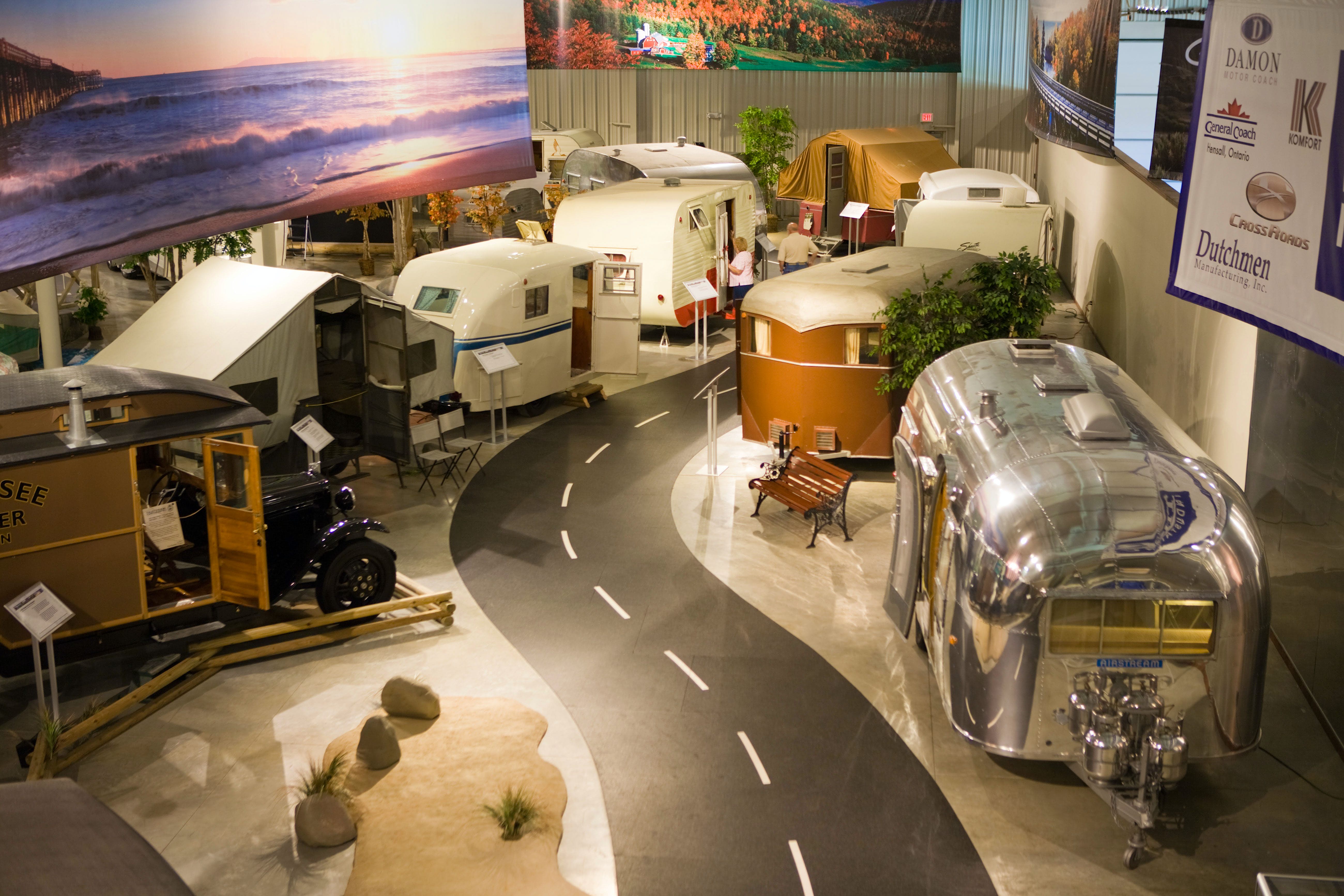 Just three years after Pierce-Arrow introduced the first RV and five years after the Model T debuted, an instructor at Cal State invented his own model of travel trailer to tow behind his own “Tin Lizzy,” as the Model T had affectionately become known. It was called the Earl after its inventor, who hired a local carriage company to build out his design, which is still on display at the RV/MH Hall of Fame.

Throughout the 1920s and 30s, as automobile ownership continued to increase and slews of new national parks were designated from Grand Canyon to the Everglades to Great Smoky Mountains, new types of RVs debuted, too. It was an era of “Tin Can Tourists” as one RV enthusiasts club called itself, a reference to the gleaming silver campers of the era – a style that lives on in the perennially popular Airstream, which debuted in the early 1930s.

No longer were visitors to national parks limited to the railroad’s massive lodges. Now they could camp throughout Yellowstone and its descendants – and at a variety of other outdoor destinations, too, including the first proper RV parks that cropped up across the country, along with filling stations and motels along brand-new “auto-trails” like the Dixie Highway, Egyptian Trail, Evergreen National Highway, and New Santa Fe Trail. 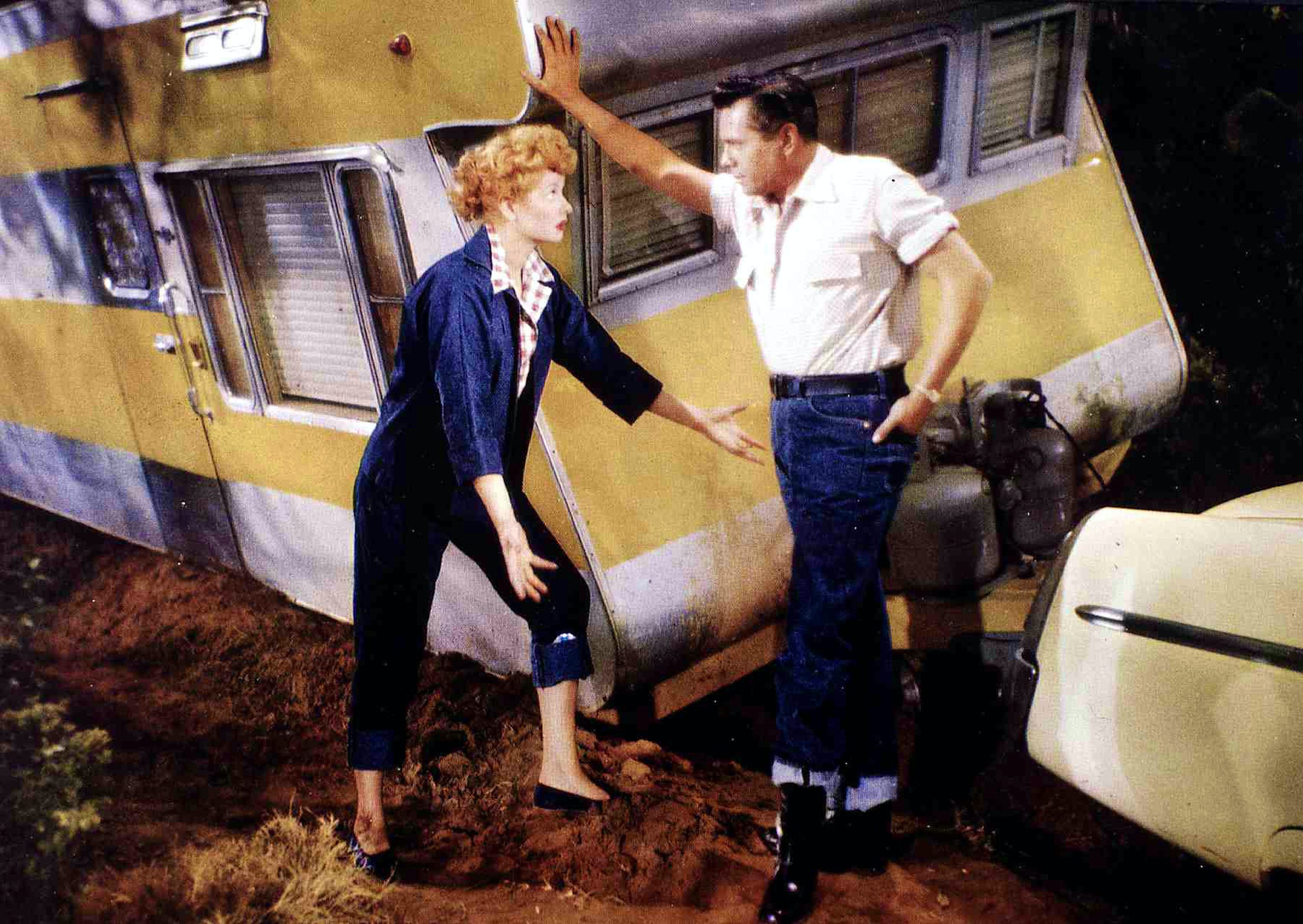 Though the Great Depression slowed the sale of RVs along with everything else in America, the Civilian Conservation Corps was hard at work on numerous projects in national and state parks around the country, constructing campgrounds and other outdoor recreation facilities still in use today. By the time World War II was over, the economy was roaring again and Americans were eager to explore. The age of nuclear family road trips and summer vacations had arrived, and so had a new generation of RVs that were bigger and more luxurious than ever, packed with new technology and ready to run on plenty of cheap gasoline. Sprawling Class A models (the largest size of RVs, which often resemble tour busses) rolled onto dealers’ lots, along with the first RVs known as “motor homes.”

RVs had started to make their way into pop culture through films like 1943’s What’s Buzzin’ Cousin? and 1953’s Long Long Trailer. A decade later, a VW microbus appeared on the cover of The Freewheelin’ Bob Dylan, just a year after Donna Reed took her fictional TV family on western vacation in a Dodge Travco RV. Also in 1962, an aging John Steinbeck hit the road in a camper named for Don Quixote’s horse, in search of the American essence and whatever the country was becoming, perhaps unaware that his journey itself, and the means by which he traveled, typified the very questions he was trying to answer.

Steinbeck’s experience, recorded in the great travelogue Travels with Charlie, later inspired CBS correspondent Charles Kuralt to start filming America’s back highways for a segment called On the Road, a project that ultimately lasted twenty years and six motorhomes. By the end of the 1960s there was no denying that RVs were firmly cemented in both mainstream family life and counterculture, as American as apple pie. 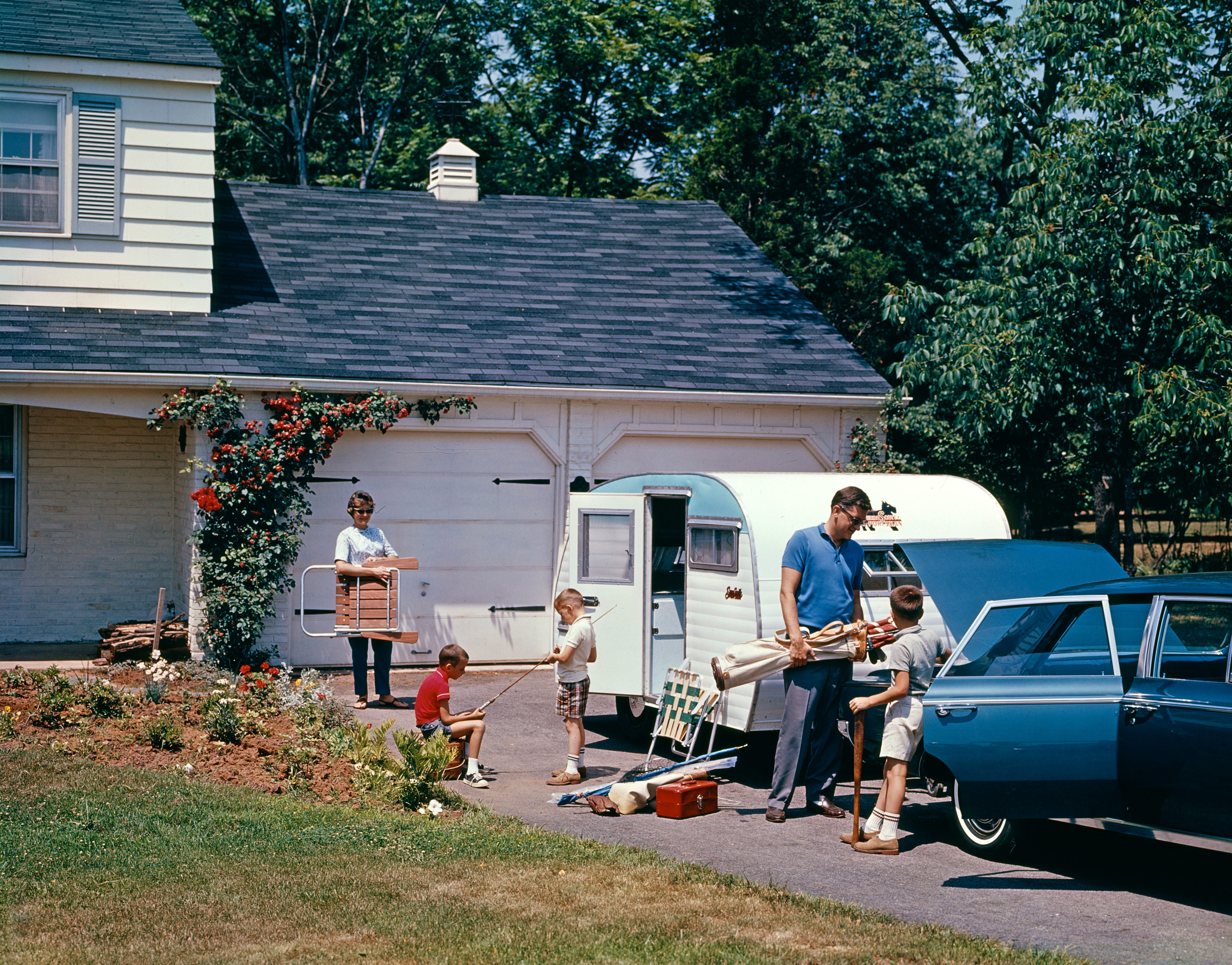 Motorhomes from the midcentury to today

Many of the carriage manufacturers who started the RV travel trend had been put out of business by big auto decades earlier, but a new generation of RV-builders were about to become household names. Small buses and conversion vans like the VW Type 2, Westfalia Vanagon, and conversions of Dodge and Ram commercial vehicles came to the fore in the 1950s and 60s and have stayed popular to this day.

Meanwhile, Winnebago released its first model in 1966, and thanks to its iconic design and affordability, the brand quickly became genericized, the company’s name synonymous with RVs in general. Competitor Jayco was founded two years later, and in 1972, a small family-run building supply company in Red Bay, Alabama, purchased an ailing RV manufacturer and turned it into Tiffin Motorhomes. That was the same year the RV/MV Hall of Fame Heritage Foundation was started in Elkhart, which later developed the Hall of Fame.

Barbie got her first RV in 1970, the same year the Partridge Family hit the road in a brightly painted Chevy school bus to make their first gig at Caesar’s Palace in Las Vegas. It was just a few years before the oil crisis put a dent in the RV industry juggernaut, slowing sales. But by the 1980s, America was still in love with RVs, giving them pride of place in popular films like Space Balls, The Blues Brothers and National Lampoon’s Christmas Vacation, proving that travel – even in far-flung galaxies – was still very much synonymous with the all-American motorhome. 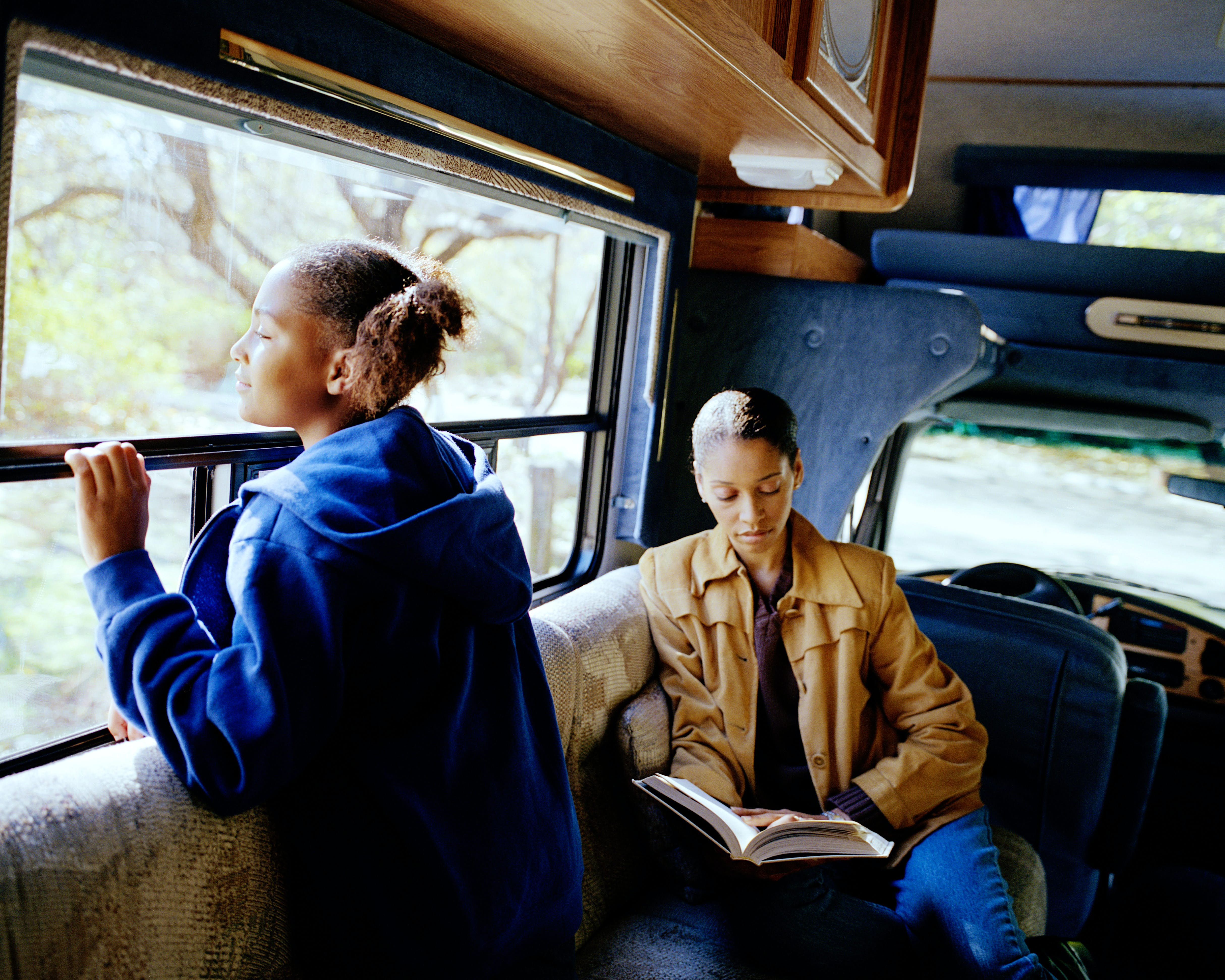 In recent years, new demographics have been getting in on RVs. As the outdoor industry diversifies, so have rentals and purchase of the recreational vehicles people use to access their favorite destinations. The popularity of the vanlife movement and a proliferation of RV influencers on YouTube and social media have contributed to RV’s shedding their retirees-only image, as new generations of “schoolies” and “dirtbags” adopt vintage school busses and new models like the Dodge Ram ProMaster and Mercedes-Benz Sprinter vans as permanent rolling homes.

Meanwhile, Volkswagen is putting the finishing touches on an all-electric version of its classic surfer van, ushering in a new, more sustainable era of RVing. Many of those now-classic brands like Coachmen and Fleetwood that became synonymous with motorhomes over fifty years ago are putting out new models with a host of features modern travelers demand, like USB chargers and faux-marble countertops. And there’s been a crop of glampgrounds mushrooming around the world where guests can savor the style of vintage Airstreams and Shastas, from Hotel Caravana in the Hudson Valley to The Vintages Trailer Resort in Oregon wine country.

The first century of RVing has been a long, strange trip. Fortunately, if you’re still curious to learn more about how your contemporary adventure rig evolved, you can gas up your current model and head to the Old West Museum, Plains Museum, the RV/MH Hall of Fame, John Sisemore Traveland RV Museum, Steven Katkowsky Vintage Trailer Museum and beyond to see the original recreational vehicles for yourself, not to mention those gleaming space-age Tin Cans, canned hams, Winnies, toy-haulers, and everything in between. You might just run into a national park or two on the way, and see some of the places that inspired your favorite motorhomes all those years ago.

This article first ran on our sister site, Lonely Planet.

What to do if your travels are disrupted by wildfires

Distancing with the stars: how to see the stars from…

This interactive map will guide you to the best fall…